A new owner for the Dodgers?

Just reading about the new buying proposal for the Dodgers, just hope they sell the team, the LA Dodgers deserve better
Posted by raultavares at 10:40 AM No comments:

Manny will stay with Dodgers, according to local website

According to local website Impacto Deportivo Manny Ramirez will stay with LA and will make it official this Friday after returning from Brasil.

"This wednesday was informed to Impacto Deportivo that Ramirez had already decided with the Dodgers", said the local website.

"Ramirez is on vacation in Brasil and as soon as he returns this friday will make his deal official, tha last offer from the Dodgers was 15.0 millions for 2009, 22.5 for 2010 and 27.5 for 2011, but this offer will be improved, why? Manny wants the Dodgers and the Dodgers want Manny".


Well, I personally don't give any credit to this report from this source, sometimes they make big impact with news from Dominican Players because the good relations they have with them, but in this case I'm sure they are wrong.
Posted by raultavares at 3:27 PM No comments:

So the Dodgers are in the playoffs, but for how long?

The Dodgers finally made it to the playoffs, thanks in some part to Manny Ramirez, but how far will they go this year? will they get another post-season victory so Jose Lima will shut about it? are they any good to compete? or they are here just because they played in the worst division of Baseball? Personally I had lost any hope of the Dodgers getting any series victory.
Posted by raultavares at 10:41 AM No comments:

Trying to Keep up

I've been away from blogging for a while, a lot happened in my absence, Winter Baseball ended, the mitchell report was on the news, Dominican Republic threatened not to attend the the 2009 baseball classic, yeah right, the 2008 season started, and of course, the Dodgers are struggling... no surprise there.
Posted by raultavares at 11:28 AM 2 comments:

Email ThisBlogThis!Share to TwitterShare to FacebookShare to Pinterest
Labels: Others

What can you say about a country that gambles on everything? From sports to politics, casino and rooster fights.

But gambling in sports is pretty amazing here; you can say that betting in baseball can be a common thing, maybe basketball too, but what about hockey? Or college football? Neither of those two sports are popular here or anyone can practice them here, but they bet on them anyway, how? Well, here in the DR there’s a gambling place or “Banca de Apuestas” in almost every corner of the country.

Even in sports shows they give you hints for bets, 1900 numbers, cell phone text messages, and all kind of things to facilitate your bets.

The difference between bets in the DR or the United States is in the Internet, in the US you have websites like www.betus.com and here you have to go the nearest “Banca” and make your plays, some people go for the safe bet and put their money on one or two teams, but many waste their money on 4 and even 6 teams, sometimes they get very lucky and collect a good amount of money, but in many cases they loose their money.

It’s amazing to see people in the morning reading the sport sections to see if they collected or if they loose, check on the upcoming games to see at what time they have to be on the “Banca” to see the “lines” and place a bet, sometimes making their evening plans counting with the money they will collect.

They follow stats, but not to see how the teams is doing, but to bet against the team on a hot streak.

If you ever had the chance to go the Ballpark in the DR, you’ll see people betting on the next hit, the double, and even on the strike.
Posted by raultavares at 4:14 PM No comments:

Today is a great day for Baseball, and a greatest day for Latin Baseball players, today MLB celebrates Jackie Robinson day, thanks to him, and for the Dodgers we can enjoy many players from this part of the world.

Thanks again Mr Robinson
Posted by raultavares at 11:22 AM No comments:

A lot of things had happened since my last update, Escogido ended up winning five in a row, started last sunday against Licey and endep up last night against the same team.

Escogido got his 1,450th victory beating Licey 5-1 ant tying the City Champ at 1, Victor Santos got the win and rookie Tony Peguero took the loss, Shane Costa lead Escogido offensive with with 3 hits, including a double, 1 rbi and 2 R, Enrique Wilson, 2 hits, 2 rbi's and 1 R and Joey Votto got 2 hits and a RBI. The only Licey run came by a James Lonet sacrifice fly inthe third inning, scoring Emilio Bonifacio.

A error by Wilson Valdez in the 10th episode gave Aguilas a win 10-9 over Gigantes.

Hector Almonte got the win and Dario Veras took the loss, Kendry Morales had a Hr, 2b and a hit for Gigantes, and Luis Polonia had 2 hits.

Jorge de Paula pitched six scoreless innings to be the key player in Escogido victory over Estrellas, with the win Escogido took over the lead of the tournament.

Joey Votto and Enrique Wilson were more notables for Escogido 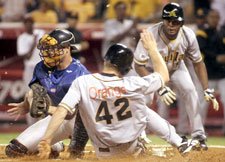 A inspired Aguilas team spoiled the season debut of mets Anderson Hernandez and Napoleon Calzado for Licey, with Dereck Lee on the mount and the bat of Alex Fernandez, The team from Santiago scored 4 runs on the first inning against Jose Jimenez, that were enough to beat Licey. Lee retired at one point of the game 11 consecutive batters.

In the Picture Brandon Moss scores one of Aguilas runs. 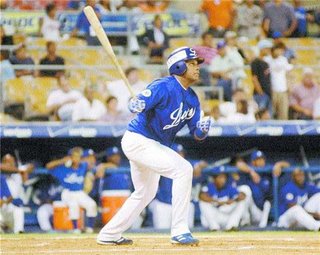 Willy Aybar watch the ball for his Hr.

Estrellas rallied for five runs in the 6th inning to beat Aguilas, Lenin Picota got the win and Agustin Montero the save, Jared Fernandez took the loss.

Jose Reyes and Eduard Roger with 2b and a single, and Joel Guzman got 2 hits to lead the Estrellas offensive.

For Aguilas Luis Polonia got 2 triples and a single, Tony Batista a Hr, Brandon Moss and Tony Pena Jr double and a hit each.

Nerio Rodriguez pitched 6 innings with 2 ER to lead Escogido to a 6-3 win over Toros.

Escogido scored 2 runs in the 6th inning with a Shane Costa double.

The winners scored four runs in the 4th inning, with Tony Pena Jr with a 2run hit.

Felix Pie got 3 hits and four rbi's to lead Licey to a victory over Gigantes, Onelis Perez got the win in relieve and Henry Owens the save.

Escogido rallied for six runs in the first inning and ended up beating Gigantes 10-4, it was Escogido fourth win in a row, Freddy Guzman led the offensive, and Argenis Reyes, Angel Pena and Chris Denorfia got 2 hits each.

Luis Polonia got his 40th life triple in the DWL to tied with Miguel Dilone, and inning later hit his 41 to tie Manny Mota.

Angel Pena hit 2 hr to lead Escogido offensive, it was 5th consecutive win for Escogido, Peter Munro got the win.

Lima pitched six innings with 9h, 3er and a SO.

Arizona prospect, Emilio Bonifacio got a 2rbi single that ended up to decisive to Licey win over Escogido, with the win Licey is half game behind Escogido. James Loney got a rbi double and Felix Pie a 2rbi double.

Licey got a good effort from lefty Carlos Perez, who got the win, Wilton Chavez followed him and Henry Owens got his third save. Ubaldo Jimenez started the game for Licey.

Matt kemp made his debut for Estrellas.

Posted by raultavares at 11:02 AM No comments: